Variously called Agar oil, Agarwood oil, oud oil, oudh or even ood, whatever you call it, it is one of the most expensive essential oils in the world.
It has been popular in Asia for centuries and has a dedicated following in many Arab countries.

It has been used for religious and spiritual functions, to improve meditation, as incense and perfume because of its fragrance and as a traditional medicine or remedy to treat various conditions and diseases too.  In recent times the fragrance has started to enjoy much wider popularity beyond the areas where it has traditionally been used.

The oil is formed when one of several species of tree in the genus Aquilaria is attacked by a fungus, resulting in a darkening of the heartwood of the tree as it produces resinoids in an attempt to fight off the infection.  Uninfected wood is light in colour, produces no essential oil and is of little value except as firewood.

The traditional method used to produce the precious oil is this: the resinous wood is chopped, soaked in water (sometimes with salt added) and then distilled, using a process called cohobation, in which the water is returned to the boiling chamber multiple times in order to extract the complete oil over a long period.  Even with cohobation and a very long boiling period the yield of oil is quite low.  More modern methods include steam distillation, which produces a slightly lighter coloured oil with more of the top-notes intact. 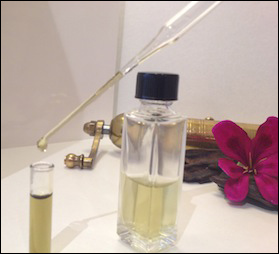 The resulting oil is viscous, from pale yellow to brownish or greenish through to very dark amber in colour. Arctander describes the scent as ‘rich and sweet-woody, almost balsamic; [like] vetiverol or purified styrene-free styrax, and with a sweetness similar to that of sandalwood oil.

The chemistry of oud oil isn’t widely understood and there are variations with species and country of origin, but components include: agarotetrol, agarol, agarospirol and methoxycinnamic acid.The particular oud sold by Hermitage is from farmed wood of Aquillaria crassna, steam distilled.  The scent is somewhat reminiscent of patchouli and labdanum but deeper, woodier and more incense-like.  The top-note has a medicinal tone to it and deeper in there is an animalic element too with lots of complexity: I’m wearing a little of it as I write and it feels like a completed perfume – a very dark and masculine one.

The medicinal top-notes fade after half an hour or so, leaving the complex resinous, sweet-woody character for which oud is famous.The oil is a dark olive-green colour and it’s mobile but thick and sticky – a little bit thicker than sandalwood.

In ethanol (we’re selling it both pure and pre-diluted at 20% v/v) it dissolves completely to give a lighter olive green, clear, light and fully mobile.  The dilution brings out the darker elements of the fragrance, and makes it less oriental somehow; this is extremely fine oil whose quality speaks for itself.